Apart from location, the next most important question on a home purchaser’s mind is probably the tenure of the property. There are generally two types of tenure in Singapore: 99-year leasehold and freehold. We consider 999-year leasehold to be the same as freehold, because their difference in value is negligible and banks will not impose any loan limits even if the lease runs into a few hundred years.

Freehold properties hold a few advantages over their leasehold counterparts – higher en bloc potential, slower pace of depreciation and no restrictions on the use of Central Provident Fund (CPF) for home purchases.

Based on exhibit 1, majority of the en bloc transactions since 1999 are freehold. Developers consider both freehold and leasehold properties for en bloc sales, but freehold properties are generally preferred, as developers do not need to pay differential premium to top up the years remaining on a leasehold site back to 99 years. 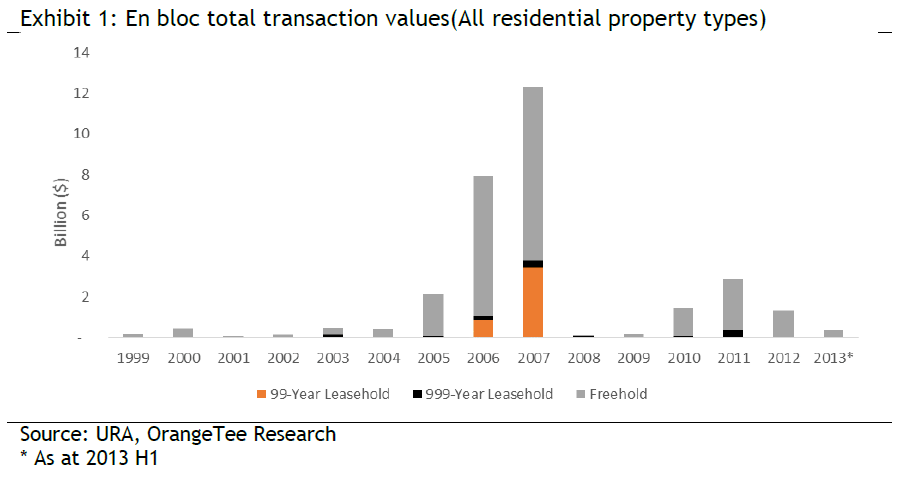 In recent years, new leasehold condominiums seem to have dominated the market (refer to exhibit 2). The proportions of new leasehold and freehold condominium sales stand at 95% to 5% respectively as of first half of 2013. In contrast, back in 2006 and 2007, around 70% of new sales were freehold. This could be attributed to the ramp-up of Government Land Sales (GLS) Programme in recent years and the tightening of en bloc rules in October 2007.

The ramp-up of GLS programme has significantly increased the supply of 99-year leasehold land in the market. At the same time, the tightening of en bloc rules has reduced the supply of freehold land. As en bloc process can be lengthy, developers might get caught in a bind when en bloc sales do not go through eventually. Recent failed en bloc sale attempts include Tulip Garden, Laguna Park, Pine Grove and Thomson View. This has pushed some developers to purchase land directly from the government. The imposition of Additional Buyer’s Stamp Duty (ABSD) further dampened the collective sales market, as all developers must sell all the units in the new project within five years—if they want to avoid paying ABSD. For en bloc sales, it can take between 6 and 12 months or even longer for legal completion, which increases the risk of development. In addition, the robust sales in the primary market in recent years seem to suggest that leasehold properties might have gained widespread acceptance among buyers. On the flipside, it also means that there will be a higher future supply of leasehold relative to freehold properties.

Going by the resale and sub-sale data (refer to exhibit 3) from URA Realis, the percentage of leasehold and freehold properties stays fairly consistent through the years. This shows that demand for freehold and leasehold property in the secondary market have remained the same.

In order to find out how properties with different tenures but similar attributes perform over time, we picked Southaven I and Southaven II (refer to exhibit 4 and 5) for illustration. Both projects were developed by Ho Bee Group and share similar attributes such as location, product quality and facilities etc. Both projects were also launched for sale in 1995, but completed two years apart. The price gap between Southhaven I and II seems to have widened from only 8% at its launch in 1995 to 18% in 2013. However, this price trend alone is not conclusive due to uneven and thin transaction volumes. For example, in 2003, there were only 5 transactions for Southaven I and 1 for Southaven II. The attributes of units sold in the same year were also not comparable as they could be on diferent levels or have different facings etc. Nevertheless, it gives a good glimpse of how two projects with different tenures located right next to each other fare over time.

If we are to look at the broader market, freehold condominiums might not always enjoy superior price appreciation over their leasehold counterparts (refer to exhibit 6 and 8). Our analysis of the freehold and leasehold indices over the last three property cycles shows that out of the three upcycles, freehold index only outperforms leasehold index over one cycle between 3Q2006 and 2Q2008. This is the period just before the Global Financial Crisis when en bloc frenzy reached all-time high in terms of number of deals and transaction values. During this upcycle, freehold properties moved up 54%, outperforming leasehold properties which only appreciated 39%. For the other two upcycles, en bloc activities were fairly muted with fewer deals and much lower transaction values. We can thus infer that en bloc potential plays a key role in determining the price performance of leasehold and freehold properties.

This is also supported by the Southhaven I and II example. The median prices of Southaven II seemed to have experienced a sharper rise than Southaven I in the years 2007 and 2008 during the en bloc frenzy in Singapore. 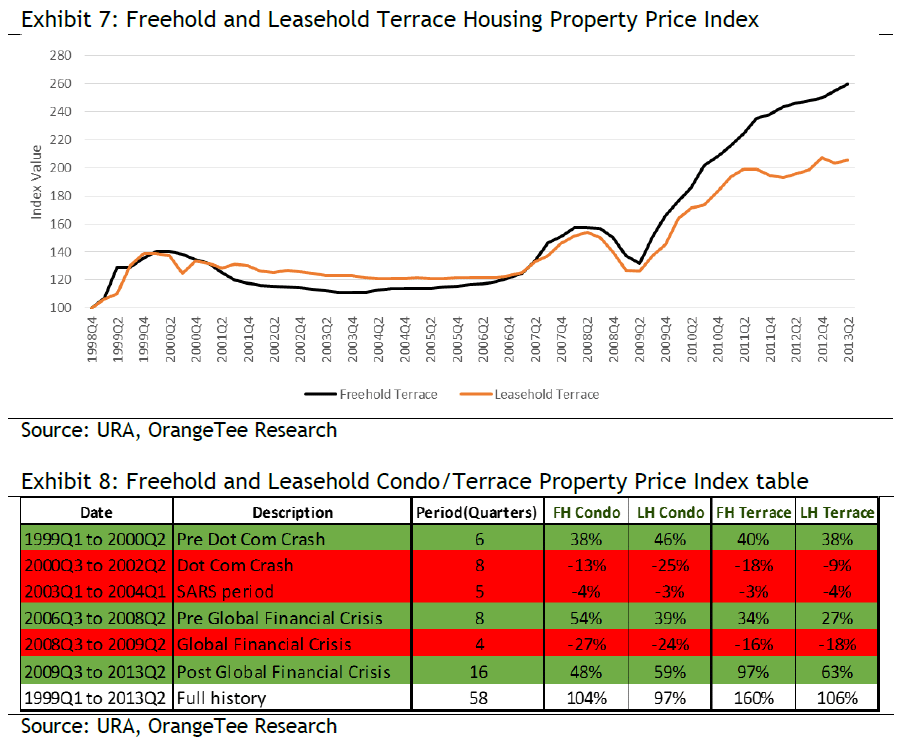 Exhibit 9 shows the buyer’s profiles for both property types. Landed segment is primarily a citizen’s play, given that PR buyers have to meet stringent criteria and require approval from the Minister for Law before they are allowed to purchase landed properties (no more than 15,000sq ft). Foreigners who are not PRs can only buy landed proeprties at Sentosa Cove. As a result, Singaporean citizens make up 88% of the buyers for landed transactions. Out of the remaining 12% buyers of landed properties, only 6% is attributed to Singapore permanent residents (PRs) and foreigners. However, the proportion of PRs and foreigners buying non-landed properties is about 25%.

So it seems that prices of freehold and leasehold properties behave very differently depending on their property types. One possible explanation could be the differences in buyer’s profile. The idea of being able to leave an inheritance to the next generation is still well-subscribed by many Singaporeans, so many are willing to pay a premium for a freehold property over a leasehold one. Hence, in a market segment largely driven by citizen demand, freehold properties tend to outperform leasehold properties.

For the analysis above, we only attempt to find how leasehold and freehold properties performed during each property cycle, and not calculate the exact premium between leasehold and freehold properties. To calculate the premium between freehold and leasehold properties, we would need to to build a basket of projects with identical if not similar locations, age and product quality, separate them into the two general tenure categories (99 and freehold) and track their transactions over a period of time. Even then, the data collected would not be
perfect as the attributes(size, floor, facing) of the units sold will differ over each period. Therefore in this context, the URA property price index should suffice, as we are only looking at the overall own base price performance of both freehold and leasehold properties.

So, which is better, freehold or leasehold? Based on the analysis provided above, the answer depends on whether one is buying a landed or non-landed property. If he/she is considering a landed property, historical data shows that buying a freehold property might be a better choice. If it’s a non-landed property, buying a leasehold could help to lock in more percentage gains if he/she buys and sells at the right time. This requires an in depth knowledge of the market and excellent execution strategy. However, over the longer run, freehold properties still outperform leasehold ones in terms of capital appreciation.

Indeed, it is never easy to determine which property tenure is better, as property values are affected by multiple factors. The leasehold and freehold indices also have their limitations respectively, as they could be swayed by the types of transactions (data could be skewed by new launches etc.) in the market. However, if we assume all else being equal, freehold property will always command a premium over leasehold property because of the advantages it is associated with such as higher en bloc potential, slower pace of depreciation and no restrictions on the use of CPF for purchases.