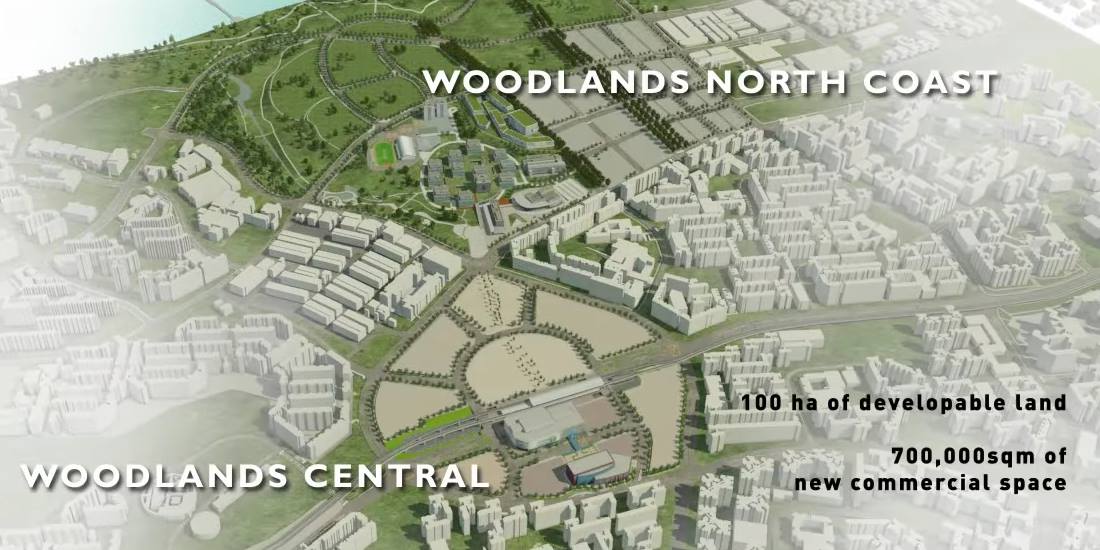 A consortium of Far East Organization, Far East Orchard and Sekisui House has put in the highest bid of nearly $634 million or $907psf ppr for the first prime commercial site in the heart of Woodlands Regional Centre. It also beat the second highest bidder by merely 2.1%. Demand is fairly strong with 8 bids put in, which included some big name developers. Developers’ interest in this site is a testament to the confidence in the upcoming Woodlands Regional Centre, which could mirror the success of Jurong Regional Centre following its plans drawn up in the 2008 Master Plan. Woodlands Regional Centre could play a complementary role given its proximity to Malaysia’s special economic zone – the Iskandar region. The growth momentum in Iskandar was also rekindled earlier this week with the announcements made by both Prime Ministers after their annual retreat. Three possible locations for the Singapore-KL high-speed rail station have been identified and the Woodlands-Johor Rapid Transit System (RTS) is on track to be completed around 2018.

In line with the decentralisation strategy announced in Concept Plan 1991 to guard against congestion and over-development in the Central Business District and Marina Bay areas, Woodlands Regional Centre has become the fourth regional centre after Tampines Regional Centre in 1992 and Jurong Lake District and Paya Lebar Central in 2008.

It will be another key growth area in the north of Singapore. Envisioned as Singapore’s Northern Gateway, Woodlands Regional Centre will incorporate retail, business, residential and lifestyle elements into its two districts – Woodlands Central and Woodlands North Coast. With over 100 ha of land available for expansion, Woodland will become a vibrant live-work-play precinct set in lush green northern waterfront over the next 10 to 15 years.

We saw vast untapped potential in Woodlands. Being the only regional centre with a coastal waterfront setting, residents in Woodlands can look forward to enjoying the stunning views of the Straits of Johor. Woodlands has 700,000sqm of new commercial space and more than 100 ha of development land; it will be well-connected to Malaysia via cross-border rail link. It meets the needs of SMEs and business who can benefit from the proximity of a major transport node and great convenience with much lower costs than CBD area. With new transportation network, fresh commercial space and room to grow, we believe that Woodlands Regional Centre is set to realise its full potential as Singapore’s Northern Gateway.

Connectivity used to be Woodlands’ major weakness, because travelling to town could be up to 35 minutes by road and over an hour by Mass Rapid Transit (MRT). Traffic congestion along the Causeway could also be a turn-off for businesses and residents alike. With the development of Thomson Line (TSL) and North-South Expressway (NSE), the accessibility of Woodlands Regional Centre will be greatly enhanced, reducing travelling time to the city centre. The upcoming TSL will have three stations in Woodlands by 2019, namely Woodlands North, Woodlands and Woodlands South. Woodlands station will become an interchange station, connecting to the current North-South Line. NSE, expected to be completed by 2020, will cut the travelling time to the city by about 10 minutes to about 20 to 25 minutes.

The existing Woodlands Waterfront will be expanded eastwards so that the entire waterfront area can be opened for public enjoyment. New and sensitively designed residential development will be built along the expanded waterfront park. Staying closer to the water, residents get to enjoy the breathe-taking sea views just at door step, away from the hustle and bustle of the city.

With the pace of development to accelerate over the next 10 to 15 years, more commercial activities will be injected in to Woodlands Regional Centre, according to the latest Draft Master Plan 2013. A mix of retail and office spaces and integrated developments will be rolled out progressively, in line with the decentralisation strategy to bring jobs closer to home. The first commercial site in Woodlands Regional Centre was put up for public tender in December 2013.

Vibrant commercial activities and job opportunities will increase the popularity of the housing estate. When fully developed, this regional centre will be able to provide approximately 100,000 new jobs. Currently, there are more than 500,000 residents in Woodlands and the neighbouring Yishun and Sembawang towns. The addition of new jobs is a substantial one and could boost demand for housing in the region should the regional centre flourish.

Besides improvements in the accessibility within the country, visiting Malaysia and Singapore will also be made easier when the Singapore-JB Rapid Transit System starts to operate in 2018. We expect that more Malaysians commute to work via the new MRT line, or send their children across the Causeway for education.

More Singaporeans will also take advantage of the weakening Malaysian ringgit and cross the Causeway for weekend shopping. With better connectivity, more synergies between Singapore and Malaysia can be created to leverage on each other’s strength. If that happens in the foreseeable future, property prices in Woodlands could surprise on the upside going forward.

Currently, potential tenants do not have much choice when it comes to renting a completed private home in Woodlands. Supply of condominiums in Woodlands is limited, as only five projects have been completed in the area over the last decade or so. Out of the five, three projects were completed more than a decade ago. Some tenants have to resort to renting apartments and condominiums in nearby housing estates such as Yishun and Sembawang while working in the industrial parks in Woodlands. In 2013, rental yields of District 25 (Woodlands) and 27 (Yishun and Sembawang) stood at 4.0% and 4.2% respectively, both outperforming the island wide average of 3.8%. Once the regional centre turns into a full-fledged business hub with full employment of the 100,000 jobs, local and foreign workers from the industrial clusters and offices could further enhance the attractiveness of its rental market.

In order to assess the possible growth and development trajectory, we took a closer look at Jurong Regional Centre as parallels could be drawn be tween the two regional centres. In view of planning, Jurong and Woodlands regional centres share common grounds. They both have a development period of 10 to 15 years. Comprising of two precincts, the two regional centres are able to combine commercial, leisure and living together, and provide green lifestyle to residents at the same time. They both have support from business parks and educational institutions to boost commercial activities. Five years after Jurong Lake District was unveiled, the regional centre has taken shape with completions of shopping centres, like J Cube and JEM, and relocations of government authorities. Meanwhile, property prices in Jurong are on par with the growth of the area. Prices of non-landed private homes in Jurong grew by 64% since 1Q2008, outperforming the Outside Central Region (OCR) average of 58.5%. Currently, prices of non-landed private homes in Woodlands are lower than OCR in all types of sales. Looking at the path Jurong Lake District has taken through, we believe that Woodlands housing market could have more upside potential when infrastructure and commercial developments are ready. 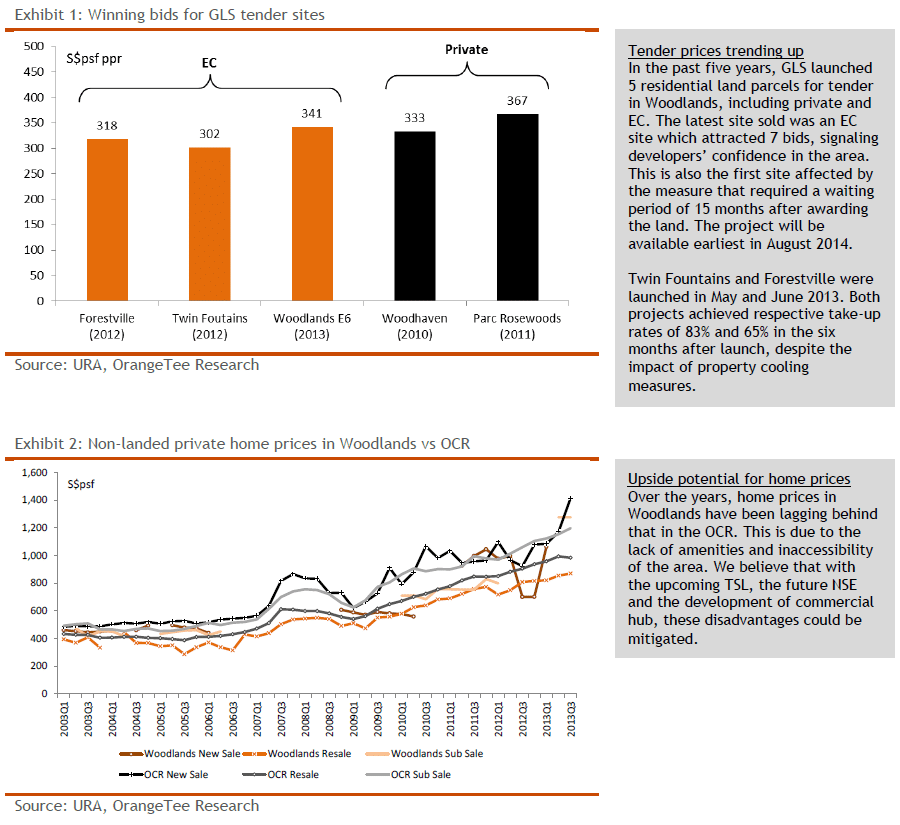 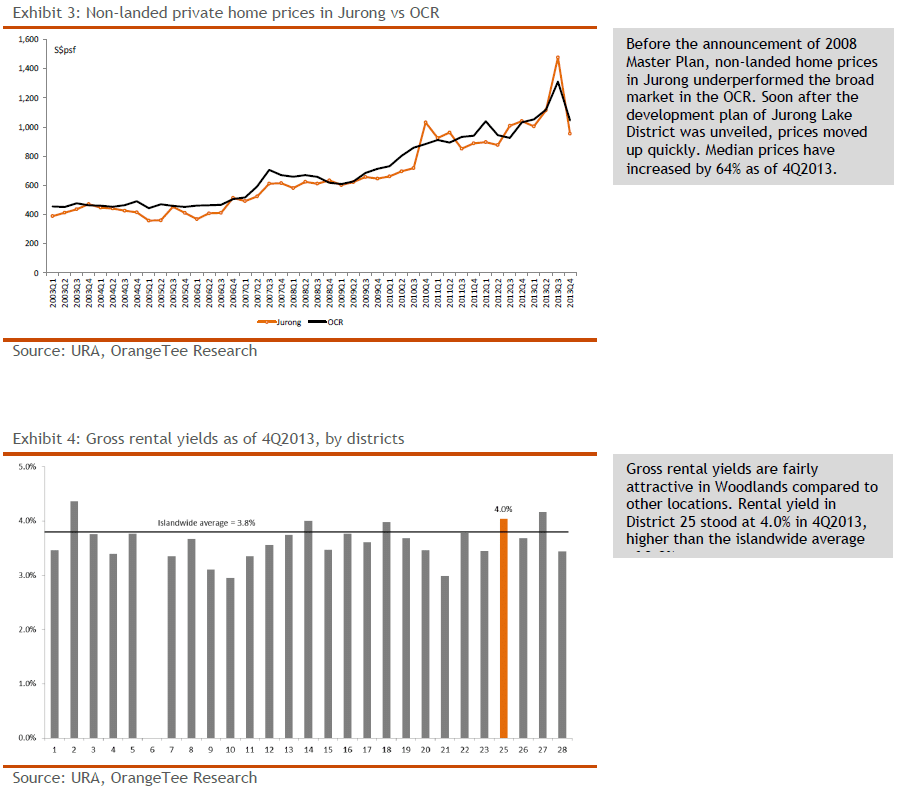 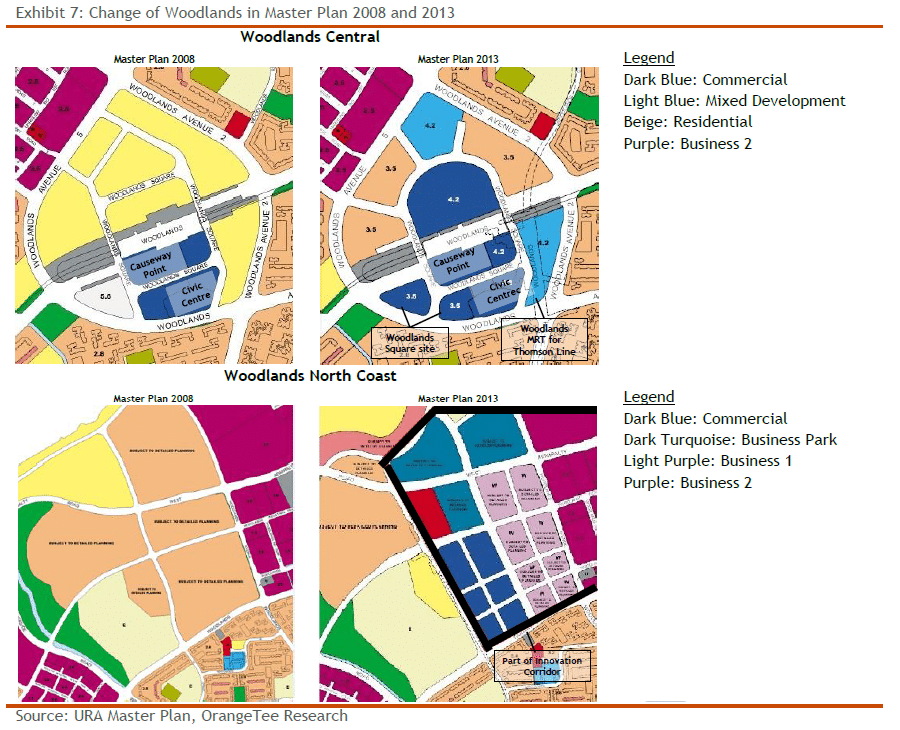